Parents who are anxious about math can still help their children learn the subject when given the right tools, according to research from current and former University of Chicago scholars.

A new study published in the December issue of the Journal of Experimental Psychology found that math-anxious parents who used an app called Bedtime Math saw improvement in their children’s math achievement—even years after the families stopped using the app. Exposure to the math app also changed parents’ attitudes about math for the better.

Following 587 students from 40 classrooms across the Chicagoland area, the researchers tracked how children who used the interactive math app compared to those in a control group who used a similar app focused on reading comprehension. By monitoring the students’ progress from first through third grades, the team discovered that using the math app closed the achievement gap between children of math-anxious parents and their peers.

That held true even after three years, when most families had stopped using the app consistently.

Those results suggest that when families used the app together, parents disassociated their own math anxiety from what was possible for their children in terms of math achievement. Because Bedtime Math frames math problems through light-hearted themes like foot size, dogs or Halloween—and provides answers with a single click—it may represent a low-stress way for parents to approach a subject that they view as intimidating.

Levine, an expert on mathematics development in young children, collaborated on this research with Barnard College President Sian Beilock, a UChicago faculty member from 2005 to 2017.

“Children with parents who are fearful of math learn less math across the school year,” said Beilock, who studies the pressures children face in school. “The power behind the parent-math app intervention is that it helped change parents’ own attitudes about math—how important parents thought it was for their child to succeed in math, for example. This change in the parents’ attitudes translated to children’s higher overall math achievement.”

For decades, scholars at UChicago have conducted innovative early childhood research, including fundamental contributions to the understanding of cognitive development. In a prior large field study, Beilock, Levine and UChicago graduate students and postdocs found that when parents are more math anxious, their children learn significantly less math over the school year—but only if their math-anxious parents provided frequent help with homework.

That connection between parents’ own math anxiety and their child’s poor math performance prompted the research team to investigate potential solutions. The scholars hypothesize that the app’s success may be tied to how it fosters positive interactions between children and parents who might otherwise shy away from math.

“It makes math accessible and it makes it fun,” said UChicago PhD candidate Marjorie Schaeffer, a study lead author who has been involved with the larger project since its inception. “They’re engaging story problems that don’t look like worksheets. The app is unique because families need to do it with their children. It’s not an app you can hand your child and walk away. It’s really about that parent-child interaction.”

Added co-lead author Christopher Rozek, a former UChicago postdoctoral scholar now at Stanford University: “The app provides a structure that makes math easier to do at home. It’s not evaluative. It gives you the answer, and there are no due dates.”

Children with parents who fear math learned less during first through third grades, but this wasn’t the case when families had been randomized into the math app group. For families in the reading app control group, researchers found a negative relation between parents’ math anxiety and children’s math achievement.

By the end of third grade, children of higher math-anxious parents who were in the control group lagged behind children of lower math anxious parents in this group, learning the equivalent of approximately five fewer months of math ‑more than half a school year. In contrast, for those families randomized in the math app group, no such gap in children’s math achievement was found.

The researchers are hopeful that the study’s long-term results could point to other avenues for families to improve math achievement.

“We hope this tells schools and teachers that, given proper support, all parents can help their children with math,” said Talia Berkowitz, a UChicago postdoctoral scholar and study co-author. “Providing anxious or uneasy parents with a little extra guidance and structure can go a long way toward improving children’s math outcomes.”

This work was funded by an Overdeck Family Foundation grant to Levine and Beilock at the University of Chicago. The chair, Laura Overdeck, established the Bedtime Math Foundation, a nonprofit, 501(c)(3) organization that produces the Bedtime Math App. None of the study’s authors have a financial interest in Bedtime Math. 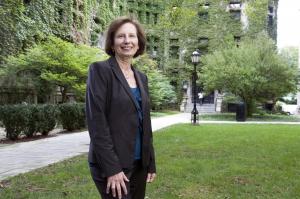