The Starkey Duncan Alumni Lecture is held annually by the Department of Psychology in honor of former faculty member, Starkey Duncan, who passed away in 2007. Each year, we bring a former student back to campus to speak on their current research.

Martha Alibali, Professor of Psychology at the University of Wisconsin-Madison, delivered the 2015 Starkey Duncan Lecture at the University of Chicago on October 29, 2105. Alibali conducts research at the interface of developmental psychology, cognitive psychology, and mathematics education. Her primary line of research investigates mathematics learning and development, with a special focus on the role of gesture in mathematical thinking and knowledge change. She is also interested in the role of gesture in thinking and communication, particularly in educational settings.

Dale J. Barr, University of Glasgow, delivered the 2014 Starkey Duncan Memorial Lecture for the Department of Psychology on October 16th. In this talk, Barr considers the problem of how people recover speakers' intended meanings during spoken language comprehension, focusing specifically on references of the form "the small candle." Understanding references requires combining knowledge about linguistic conventions with situation-specific inferences related to the communicative context. To what extent are listeners able to integrate linguistic and contextual information, and to what extent can they do so in an optimal manner? Barr reviews findings from a set of experiments suggesting that language comprehension is not optimized toward understanding specific speakers and their intentions, but rather toward the possible intentions of a generic speaker. Barr also reviews evidence that comprehenders can rapidly generate situation-specific interpretations through the "trick" of attribute substitution.

Beyond Dreams: Developing Sensorimotor Memories in our Sleep

How are the “rudimentary” movements of fetuses and infants transformed into the coordinated, flexible, and adaptive movements of adults? Some believe that adult behaviors are built from “motor primitives,” endowed units of behavior, hardwired in the spinal cord, that arise fully formed without the need of experience. In contrast, numerous developmental psychologists and roboticists have emphasized how infants discover how their bodies are built, how they change in size and shape, and how they move. Not surprisingly, this process of discovery has been presumed to occur only when infants are awake, reflecting the common wisdom that sleep is a period of sensory isolation and behavioral stillness. In fact, over the course of a night we move a lot. Some movements occur during brief awakenings when we roll over or throw off the covers. But during active (or REM) sleep, a very different sort of behavior occurs: Every skeletal muscle in our body twitches, causing jerky movements of the arms and legs, fingers and toes, eyes, and (in rodents) whiskers. These movements are particularly prominent during the perinatal period when active sleep predominates. Although considered for centuries to by-products of dreams (think dogs “chasing rabbits”), research in infant rodents over the past decade has revolutionized our conception of what causes these limb movements, how sensory feedback from twitching muscles is a primary driver of neural activity in the brainstem, cerebellum, hippocampus, and cerebral cortex, and how these “by-products” may actually participate in the self-organization of the sensorimotor system. This new view of twitching has important implications for our understanding of typical and atypical development and recovery of function after injury or disease, and may even help in the creation of more flexible and adaptive robots.

Starkey Duncan, Jr., a Professor in Psychology at the University of Chicago was a leading researcher in the study of nonverbal and verbal interactions.

“He loved his family and dedicated his entire career to the University of Chicago. He was an innovative educator and researcher who cared deeply about his students,” said his son, Arne Duncan, CEO of the Chicago Public Schools.

Professor Duncan was a leader in developing the field of research to study interaction between verbal and nonverbal communication.

“Starkey was one of the pioneers in the field of nonverbal communication, though he preferred to think of his research as studying face-to-face interaction,” said David McNeill, Professor Emeritus in Psychology at the University of Chicago. “He looked at gesture, gaze and other aspects of interaction as an integrated whole and through time.”

Duncan's research led to one of the seminal books in the field, Face to Face Interactions: Research, Methods, and Theory, published in 1977, which he wrote with the late Donald Fiske, also a Professor in Psychology at the University of Chicago.

Duncan also was co-author of a book Interaction Structure and Strategy published in 1985 as well as numerous journal articles.

“He would have considered one of his major contributions to the field to be methodological,” McNeill said. “He worked out a way to diagram the verbal and nonverbal communications that people have in such a way that he could chart how an interaction flows. His goal was to establish the rules that guide an interaction.”

In the years preceeding his death in 2007, Duncan became interested in expanding his work to include interactions between parents and children, looking, for instance, at what parents do to help a child learn how to use a spoon instead of hands for eating.

His work with parents and children included videotaping and then studying the videotapes. “He was a pioneer in using videotape for research in the social sciences,” McNeill said.

The videotapes became widely used by other researchers in different fields. "I remember there was one we studied quite a bit for linguistics that involved a conversation between a student from the School of Social Service Administration and one from the Law School. It was an example of how people can interact when they first meet. Because they were both students, they began by talking about their academic backgrounds, and when one student was not very forthcoming, the other student zeroed in and kept pressing him for more information.”

Adapted from UChicago News obituary published here, on May 16, 2007. 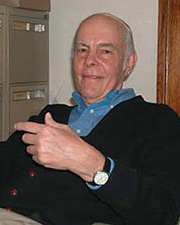 Duncan also was co-author of a book Interaction Structure and Strategy published in 1985 as well as numerous journal articles.

Read more about Professor Duncan below.