A distinction this subtle might not seem important, yet it appears across nearly all spoken languages.

In fact, this distinction may be intrinsic to the very development of language, according to new research co-authored by a leading psychologist at the University of Chicago. Published May 28 in the Proceedings of the National Academy of Science, the study found that sign language users in Nicaragua also distinguished between the concepts of symmetry and reciprocity—despite having developed their language in isolation.

Less than a half-century old, Nicaraguan Sign Language offered researchers their first chance to observe the growth of a new language in real time. In the mid-1970s, a group of about 50 deaf children were brought together to a school for special education in Managua, the country’s capital. Because deaf individuals in Nicaragua had had almost no prior opportunities to interact, the founding of the school created a situation for them to develop language without the influence of existing languages.

That such fine linguistic differences exist in a young language suggests that these properties are universal. The study also found the distinction among a handful of homesigners, deaf individuals who interact only with hearing individuals.

“If language were wiped out tomorrow and people had to reinvent it, I bet they would still distinguish between symmetrical and reciprocal events,” said study co-author Susan Goldin-Meadow, who has helped define the fields of gesture and non-verbal communication. “Other properties of language might not be reinvented, but this distinction appears to be so fundamental to human language that it would be.”

The researchers studied 27 deaf individuals in Nicaragua, four of whom were adult homesigners who each developed a gesture language outside of the signing community. Ranging in age from 18 to 45, each participant watched a series of video clips showing actions that could be construed as symmetrical (e.g., high-fiving) or reciprocal (e.g., punching). Participants were then asked in gesture or sign to describe those videos.

This type of evidence can help researchers figure out the conditions under which properties of language emerge. A property that a homesigner develops, for example, would likely emerge in all human communication systems—even in the absence of a communication partner or a language model. Other language properties might require a partner, or a structured learning process to ensure they are passed down from generation to generation. 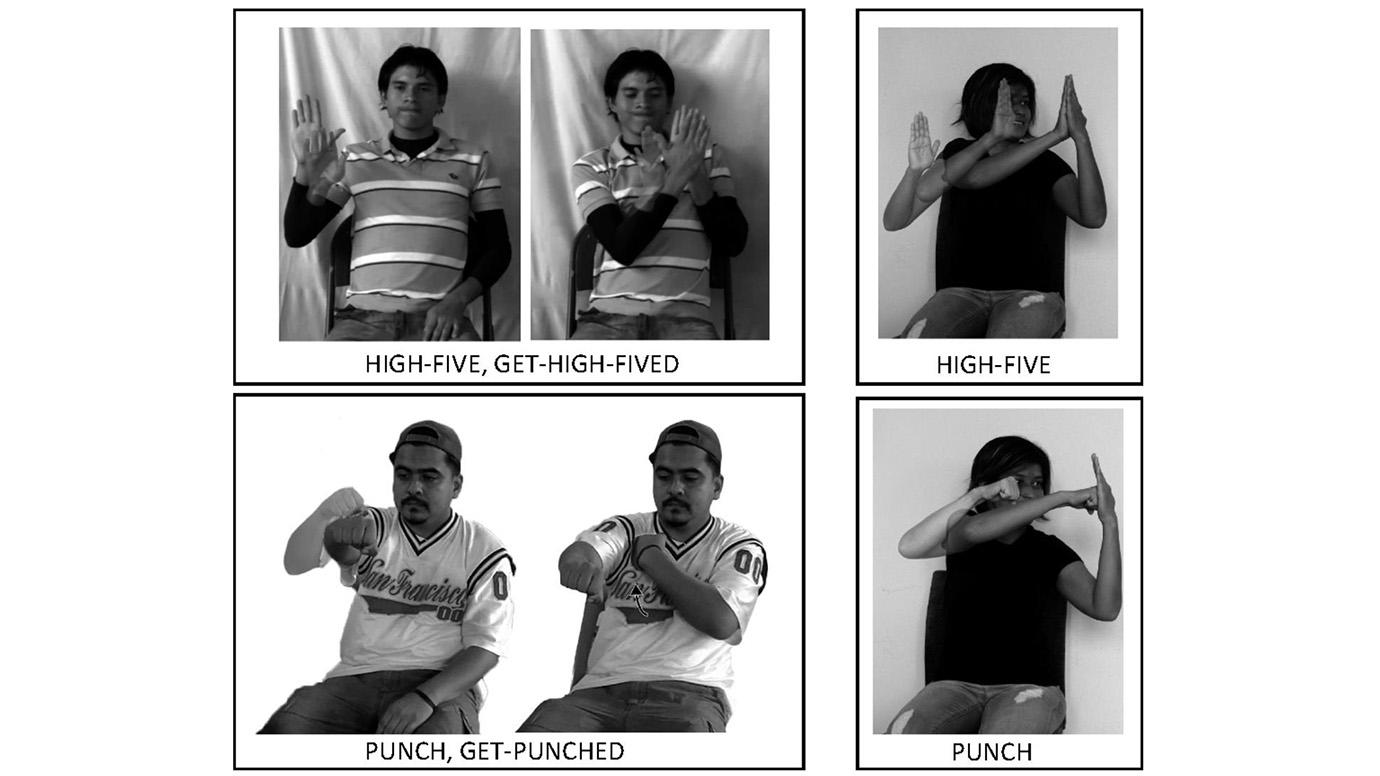 Researchers showed video clips depicting actions that could be construed as symmetrical or reciprocal, then asked study participants to describe what they saw.
Courtesy of Susan Goldin-Meadow, et al.

To further this field of research, Goldin-Meadow hopes to study if and when babies begin to distinguish between events that can be construed as symmetrical or reciprocal.

But why is such a distinction so omnipresent in human languages? That’s a question researchers still can’t answer.

“There are many other cognitive structures that we don’t bother to encode in our language,” Goldin-Meadow said. “Our study can’t explain why languages distinguish between symmetrical and reciprocal events, but it does tell us that this distinction is important to the human mind and to communication.”