Susan Goldin-Meadow is the Beardsley Ruml Distinguished Service Professor in the Department of Psychology and Committee on Human Development at the University of Chicago. A year spent at the Piagetian Institute in Geneva while an undergraduate at Smith College piqued her interest in the relationship between language and thought, interests she continued to pursue in her doctoral work at the University of Pennsylvania (Ph.D. 1975). At Penn and in collaboration with Lila Gleitman and Heidi Feldman, she began her studies exploring whether children who lack a (usable) model for language can nevertheless create a language with their hands. She has found that deaf children whose profound hearing losses prevent them from learning the speech than surrounds them, and whose hearing parents have not exposed them to sign, invent gesture systems which are structured in language-like ways. This interest in how the manual modality can serve the needs of communication and thinking led to her current work on the gestures that accompany speech in hearing individuals. She has found that gesture can convey substantive information – information that is often not expressed in the speech it accompanies. Gesture can thus reveal secrets of the mind to those who pay attention.

Professor Goldin-Meadow’s research has been funded by the National Science Foundation, the Spencer Foundation, the March of Dimes, the National Institute of Child Health and Human Development, and the National Institute of Neurological and Communicative Disorders and Stroke. She has served as a member of the language review panel for NIH, has been a Member-at-Large to the Section on Linguistics and Language Science in AAAS, and was part of the Committee on Integrating the Science of Early Childhood Development sponsored by the National Research Council and the Institute of Medicine and leading to the book Neurons to Neighborhoods. She is a Fellow of AAAS, APS, and APA (Divisions 3 and 7). In 2001, she was awarded a Guggenheim Fellowship and a James McKeen Cattell Fellowship which led to her two recently published books, Resilience of Language and Hearing Gesture. In addition, she edited Language in Mind: Advances in the Study of Language and Thought in collaboration with Dedre Gentner. She has received the Burlington Northern Faculty Achievement Award for Graduate Teaching and the Llewellyn John and Harriet Manchester Quantrell Award for Excellence in Undergraduate Teaching at the University of Chicago. She is currently the President of the Cognitive Development Society and the editor of the new journal sponsored by the Society for Language Development, Language Learning and Development. Professor Goldin-Meadow also serves as chair of the developmental area program.

Goldin-Meadow, S. & Mylander, C. Gestural communication in deaf children: The effects and non-effects of parental input on early language development. Monographs of the Society for Research in Child Development, 1984, 49 (3), no.207.

Goldin-Meadow, S. The resilience of language: What gesture creation in deaf children can tell us about how all children learn language. N.Y.: Psychology Press (a subsidiary of Taylor & Francis), 2003. 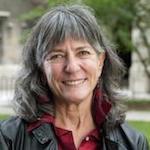 Susan Goldin-Meadow is a professor in the Department of Psychology.